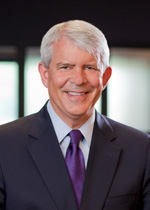 I have served as a mediator nearly 150 times in Columbus, Cleveland, Akron, Canton, Toledo, Dayton, Cincinnati and other cities throughout Ohio. My experience and expertise as a trial lawyer for defendants and plaintiffs in serious injury and wrongful death cases provides me with a balanced perspective as a mediator. The number of cases I have been asked to mediate has increased each year since 2014.

At age 29 I was elected partner in a major Columbus law firm after being 1st Chair in more than 20 personal injury and other trials and 2nd Chair in many medical and legal malpractice trials.

At age 34 I was elected Chair of the major Columbus law firm’s Trial Department and of Client Development; I was elected 8 straight years to those positions.

At age 34 I was inducted into International Association of Defense Counsel.

At age 41 Frank Ray and I formed a law firm in which I continued my primary area of concentration of medical malpractice, but as a plaintiffs’ lawyer.

At age 44 I received board certification in civil trial advocacy by the National Board of Civil Trial Advocacy after passing a lengthy written examination.

At age 45 I was inducted into the American Board of Trial Advocates; I was elected to its Executive Committee (Ohio) in 2017.

I have been recognized in the Martindale Hubbell Bar Register of Preeminent Attorneys in medical malpractice as both a defense and plaintiffs’ lawyer since 1992.

I have tried more than 60 cases to verdict and argued more than 15 cases in various Ohio Courts of Appeal and the Ohio Supreme Court.

In 1994 I switched sides to represent the interests of those injured by medical malpractice, vehicular collisions, construction accidents and unsafe premises. More than 250 attorneys have referred me potential clients due to my experience and expertise as a trial lawyer.

I have lectured throughout Ohio on civil litigation issues and trial techniques and have shared trial skills and knowledge of substantive law with audiences of lawyers, law students, professional associations and medical groups. I have also authored legal articles in bar publications and continuing legal education manuals.

Combined with John Alton’s educational background in psychology and leadership positions he had held within law firms and renowned professional organizations, John Alton is able to facilitate settlements even in the most difficult and highly contested cases without interjecting his personal opinion unless asked.